Homicide is a neo noir from 1991 by modern film great David Mamet.  Mamet who wrote and directed this film has also wrote a ton of great neo noir and crime films over the last 4 decades.  He writes some of the best dialog around with a rhythm to it that is hypnotic.  It is street level crime poetry, and the flow and delivery from some of the best actors around.  This is the first time I’ve seen this film, but it won’t be the last.  I’m not sure how I missed this in the early 90’s at the video store, or never really heard much about it.  It popped up on a few neo noir lists and when I seen who stared in it as well as it being a Mamet film, I put it to the top of my Netflix Queue.

This film revolves around Joe Mantegna as our Homicide Detective lead.  He is tough, but tough in a different way than our normal hardboiled detective.  He uses his people skills and smarts rather than his fists and gun.  In fact we see a number of pivotal scenes where his physical strength is tested and he fails these tests.  We also see him get back up and keep trucking along.  This film has a lot of racial tension as well.  Our hero is Jewish and seems to shun this at first, but later is torn between being a great cop or a good Jew.

William H. Macy plays Mantegna’s partner and their dialog and banter is some of the best in modern noir.  Macy is always good and doesn’t disappoint here. He plays the sidekick who doesn’t question anything his partner does, because to him, his partner can do no wrong.  Will this be his downfall?

This story starts with an F.B.I. raid on an apartment, they kill an innocent black women and their suspect gets away.  It’s a mess the F.B.I. dumps on the local Homicide division.  Our two detectives take the case, with a lead they think will pan out.  On the way to apprehend the suspects brother to see if he will roll over on his brother, we come to some flashing lights and a cop in need of some help.  As Macy takes the car and goes on to the planned meet with the suspects brother, Mantegna stays behind to help the uniformed police officers.  An old Jewish women has been shot with a shotgun and her store robbed.  Mantegna catches the case and is taken off the more high-profile original case.  He continues to juggle the two cases.  On one hand he is helping his people solve the murder case of a Jew.  On the other he is trying to find the black man the F.B.I. is desperate to find.

This has some great actors in this besides our two leads.  Though all are great in this, the two small parts that stand out to me are Ving Rhames in one of his earliest movie roles as the black suspect the first case revolves around, and Ricky Jay as one of the members of the Jewish community the second case revolves around.

The movie isn’t just noir in story but also is filmed in a classic film noir style, using washed out colors and shadows through out. 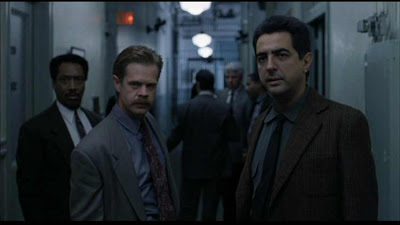 I really loved this film and think noir lovers of the classic era as well as the modern neo noir lovers will like it too. This film has more to say then a simple murder mystery and touches on racial tensions not only between whites and blacks but the Jewish community as well. I look forward to watching and re-watching more from Mamet for this site in the future.