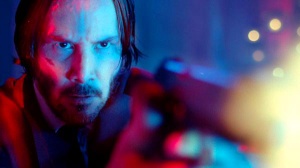 John Wick is a neo-noir with a lot of action!  This has a simple plot and not a very original one.  We’ve seen this in various versions throughout the years.  An innocent man, well maybe not totally innocent man is wronged by some bad guys.  Things that come to mind are Point Blank and Payback(we will look at these two movies based on the Parker books later), as well as maybe a little Death Wish.  The list can go on and on….but is that a bad thing? This isn’t some mind twisting plot with a commentary on society that will make you re-think your life.  Revenge and vengeance are common themes in film and it makes for a fun movie.  I loved John Wick, yeah we know how it’s going to end almost before it begins, in fact the opening scene also happens to be a scene from the end of the movie.   Chad Stahelski and David Leitch made a great film on their first attempt.  The action is amazing, but I really love the way it was shot.  You can tell they have been around the movie industry and know how to make interesting scenes and sets.  A lot of the scenes reminded me of classic noir films in bright color instead of black and white.  I purposely didn’t look into this movie much before I watched it.  All I knew is people liked it and it has Keanu Reeves in it.  I’m glad that’s all I knew, there are some great cameos in this film I didn’t know where coming and liked them.  My three favorites are Willem Dafoe, Kevin Nash and Lance Reddick.  I will not give you anymore so you can be surprised and enjoy the film like I did. If you want a fun movie with some great scenes and an amazing look, look no further, check out John Wick.