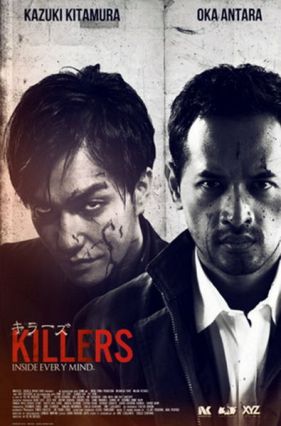 Killers is a neo noir film from the The Mo Brothers(Kimo Stamboel, Timo Tjahjanto).  This takes place as much on the internet as in its two physical locations of Tokyo and Jakarta.  This is two stories of two men who interact on the internet and their stories intertwine throughout.

The movie starts with our first story centering around Nomura, played by Kazuki Kitamura.  We find him torturing and murdering a girl, then he posts it on the internet.  Normura has mother and sister issues and reminds you of Norman Bates in a lot of ways.  He is a very disturbing man and is very frightening, Kitamura plays this role very well.

Our second story revolves around Bayu played by Oka Antara.  Bayu is a reporter who is not happy with a certain powerful man in his country who has gotten away with abusing his wife.  This is just the latest in a string a crimes this man has gotten away with.  Bayu is obsessed with this man and bringing him to justice. Bayu soon finds Nomura’s video of his murder online and is strangely fascinated.   Bayu and his wife are separated and after one evening bring his daughter to his wife’s house and trying to win his wife back, Bayu falls asleep in a cab on his way home.  He wakes up in an empty lot with the cab driver wanting to mug him and the cab drivers big friend trying to rape him.  There is a struggle and Bayu comes out on top, he films the cab driver as he dies.  He soon uploads his own murder video to the internet and Bayu and Normura start a relationship.

Bayu continues his murder spree, killing bad men as a vigilante as Normura continues his psycho killings.  Their stories run parallel as well as intertwine throughout the film with many twists and turns.

This is a very good neo noir foreign film worth a look if you are a fan of Asian cinema.  If you like serial killers and vigilantes you will also enjoy this film.  These two stories, each on their own would still make a good film but not overly original, twisted up into one movie makes this film very fresh and enjoyable.