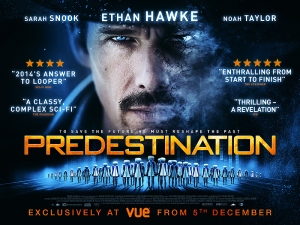 Predestination is a SciFi Neo-Noir from The Spierig Brothers.  The brothers don’t turn out movies to fast, but they make good films.  Their first film was Undead, a zombie comedy, maybe a little ahead of its time.  Then they waited 6 years to do the very unique neo noir take on vampires in Daybreakers.  Then they waited another 5 years to release Predestination.  I look forward to seeing more from these guys, I just hope I don’t have to wait another 5 years.  The source material for this film is from my favorite science fiction author of all time, Robert A. Heinlein.  Heinlein has written some amazing novels in his career, they really make you think about the world you’re in, based on a world he created.  While watching this you will see a few Heinlein Easter Eggs in the film.  If you have not read Heinlein, please do not base your opinion of his work from the movie Starship Troopers. His story “All You Zombies” is an amazing plot for this film.  I have not read this short story yet, but will be hunting it down to read it as soon as possible.

I purposely did not read any reviews of this movie so I could watch it fresh and without spoilers.  As always I will not post any spoilers in this review so you can enjoy it fresh as well.  This is a movie about time travel, you can see influences from other great neo noir films with time travel, like 12 Monkeys and Looper.  The filming style in some parts of the movie reminded me of Dark City (another movie influenced heavily by Heinlein’s work). 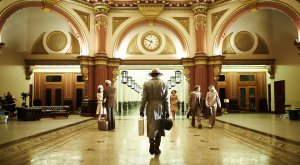 Though this may remind me of some of the best science fiction noir films of the past, it is something uniquely its own.

This movie has two great stars that have amazing performances in this.  Ethan Hawke is our big name star.  I got to say Hawke has one of the best track records so far this century!  He hasn’t been in a big Hollywood movie, probably since the mid 90’s.  Besides the horrible Selena Gomez vehicle, The Getaway, he has made nothing but above average to mind blowingly great smaller films.  Our other outstanding performance and really the one that steals the show is by Sarah Snook.  I have not seen Snook in anything else yet, but look forward to seeing this rising star in more movies. Noah Taylor plays a smaller role but a very pivotal one.

I seen an interview with Hawke about this film and he says something to the effect that you will not understand this film on the first viewing.  I have only watched this once, but Predestination is a film where, I think, the more you watch it the more little bits of information you pick up on and a film that maybe even better the second and third time you see it.

I highly recommend Predestination if you like science fiction mixed in with your noir.  A sure thing to be a cult classic.