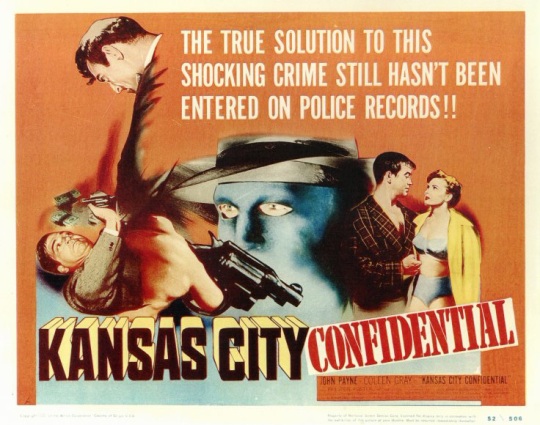 Kansas City Confidential is a classic film noir from 1952, directed by Phil Karlson. I watched this recently because of the recent passing of Coleen Gray. I loved Gray in Nightmare Alley which I reviewed here:

This story starts out with Preston Foster casing a bank. He is timing when a delivery man is stopping at a floral shop and when an armored car is picking up cash at the bank next door. When he seems to have the perfect crime planned out he starts to recruit his team. His team consists of three of the best actors to play thugs in the classic film noir era. The three criminals are played by Neville Brand, Lee Van Cleef and Jack Elam. The key to this heist is all four men wear a mask all the time!

The masks not only hide their I.D. from witnesses and the police, but also from each other. This way if somebody is busted they can not rat out the other three. So the robbery goes down, as our driver of the florist truck leaves, the crooks pull up in an exact replica and rob the armored car. When the A.P.B. goes out for the getaway vehicle our innocent driver is soon pulled over. The driver is played by our headlining star for this film,John Payne. The police take Payne in, thinking he has to be involved in the armed robbery in some way. He has been in prison for a year and just recently got out, so it doesn’t look good for him. As our four thieves get away clean and disappear to 4 different locations, with plans to meet at an unknown location later to split the money. When the police let Payne go, he starts his on investigation to find out who framed him. We don’t stay in Kansas City very long for this one as we travel to a few foreign locations.

This plot is a very well crafted story and you don’t know where it is going until the very end. The plot is very complicated, but very easy to follow. Though I watched this for Gray’s involvement, and she is great in her role as the innocent traveler who falls for Payne, the five male leads of this film stole the show. This is a must see for classic film noir fans and film buffs in general.