Neil Cross does it again, with season 2 of Luther. This season is even darker then the first and explores the underworld of London.

With the finale leaving us in ah and wondering “now what?” We find Luther( Idris Elba) is still in his position as a detective. Ripley(Warren Brown) has been demoted for his actions in season 1. Martin Schenk(Dermot Crowley)has taken over the department. The big question was where was Alice Morgan(Ruth Wilson) going to end up after season 1? Well we find Alice in an mental hospital after a short prison stint and a suicide attempt.

For season 2  Benny Silver( Michael Smiley) has joined Luther’s team on a permanent basis. By the book Detective Erin Grey( Nikki Amuka-Bird) has also joined the team, but does not trust Luther, due to the rumors surrounding him as a dirty cop.

Caroline Jones played by Kierston Wareing shows up looking for Luther’s help. Luther captured her husband years ago, when her husband accidentally killed a prostitute and she has been leaning on Luther ever since. The husband committed suicide in prison and Caroline still blames Luther. Caroline wants help finding her daughter, how is going to shot a disturbing pornographic film soon. Luther knows he shouldn’t get involved, but eventually does. He brings Caroline’s daughter Jenny, played by Aimee-Ffion Edwards, to a safe house. This sets off a chain of events that drags Luther deeper into trouble. 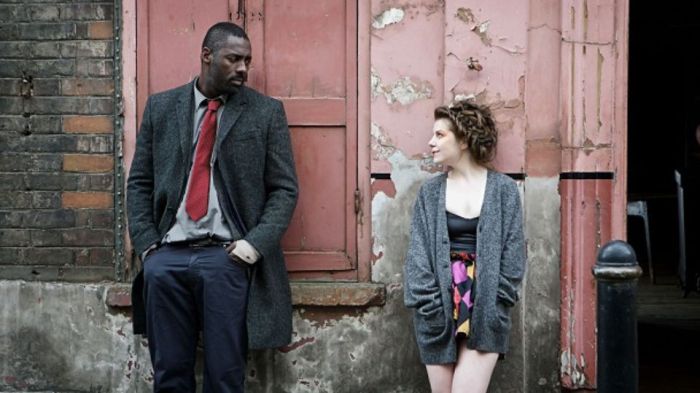 Season 2 is only 4 episodes long with the first two episodes covering a case of a man fascinated with the Spring Heel Jack from English Folklore and the last 2 episodes cover a psychotic who is inspired by role playing games to cause panic and destruction on the city.

Luther has had enough of being a detective and wants out, he just needs to finish up a few things before he leaves. This of course doesn’t work out for him as he cleans one thing off the books, something else comes up he must take care of.

The shooting of season 2 is even more in the neo noir spirit then the first season. We still get mostly shades of grey with splashes of red and a few other colors now and then. The shooting of reflections on glass or through glass are prevalent once again.

If you liked season 1, you are going to love season 2! Look for a review of Season 3 tomorrow.

Here is yesterday’s look at season 1: