The following essay contains spoilers for Too Late for Tears:

Flicker Alley is hosting a noir blog-a-thon for their new Blu-ray/DVD release of two classic films noir which have been recently restored. They have asked me to participate in this blog-a-thon by writing something about one of these classic films. Unfortunately I do not have copies of these two films so I’m writing this based on viewing them quite a while ago. I also have already reviewed both of these films in the past on this site.

The first film we are looking at is Woman on the Run  which I have reviewed here:

The second film is Too Late for Tears  which I reviewed here:

So what is left to talk about? I would like to look at the two main stars and the characters that they play in these two films. It is interesting we have females as the main protagonists in both of these films, something we didn’t see very much in 1949 and 1950. This maybe the only thing these two films have in common, the two females are very different from one another.

and Lizabeth Scott in Too Late for Tears . 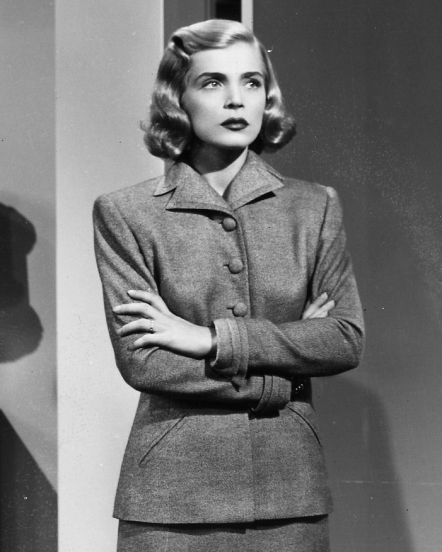 Our two leads have very little in common other then they are both married at the beginning of our films. Liz is happy in her marriage and Ann is not sure after 4 years of marriage if she is happy or not. Ann wears heavy coats in most of her film partly to show her acting chops instead of relying on her figure. Liz’s character uses her womanly charms to get what she wants from the men in her life, a classic femme fatale. Ann goes on a journey that seems to save her marriage; Liz has no problem getting rid of her husband for the chance at a bag full of money. Ann fights to find the truth while Liz does whatever it takes to cover up her trail.

As Ann’s and Liz’s characters in these two films seem like polar opposites their careers seem to be just as different.  I was not that familiar with Ann’s career but after watching Woman on the Run I became a fan and have watched many films with her in it over the last year. She may have been known for her figure and get her start in film by winning a beauty contest; she used that to have a very diverse career. Holding her own with the top male stars from the 1930’s through the 1950’s. She was in many great films noir, but also held her own in everything from slap stick comedies to serious dramas.

Liz on the other hand became a star after appearing in the classic film noir, The Strange Love of Martha Ivers, and seemed to be type cast. She appeared in mostly gritty films, often the femme fatale. With a sultry voice that gave Lauren Bacall a run for her money and a face that could cause any man to bend to her whim.

Though Liz and Ann where very different in career and character, they did have a few things in common. Both played strong females often and both had the talent to carry a film. If you are not familiar with either of these great actresses, these two films are a great place to start. If you are a fan, and have not seen these yet, go do it! I thank everybody involved in restoring these two films and can’t wait to see what films they will restore next!

You can buy Woman on the Run

You can buy Too Late for Tears

Also check out all the other Blog-a-Thon entries here:

Too Late for Tears is a classic film noir from 1949 from director Byron Haskin. The film is based on a “Saturday Evening Post” serial and screenplay by Roy Huggins. This film had fallen into public domain and good copies of this film where hard to come by. Thanks to The  Film Noir Foundation we got a restored version that took 5 years to complete. The restored version debuted on Turner Classic Movies this summer and has been shown fairly regularly on TCM since. 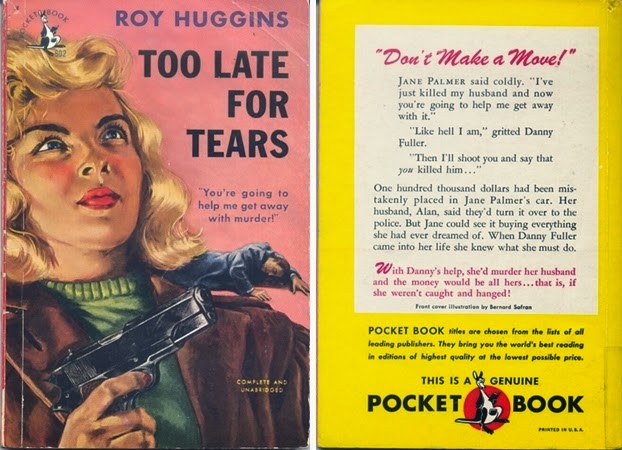 This film has two of noir fans favorites in it, Lizabeth Scott and Dan Duryea.

This film starts with Jane Palmer(Lizabeth Scott) and her husband,
Alan Palmer played by Arthur Kennedy, driving down a back road when Jane wants to go back home. They argue and the car swerves back and forth. When they pass an oncoming car, somebody throws a bag full of money into their car.

Jane always wanting to have money, wants to keep the cash. Alan wants to give the money to the police, knowing it will cause problems. Jane talks him into keeping it for two weeks before they make a decision. Things turn worse when Danny Fuller( Dan Duryea) comes looking for his money. Things get out of hand fast for Jane, who does whatever it takes to keep the money.

Things get even more dire when Alan’s sister Kathy played by  Kristine Miller and a strange man Don played by  Don DeFore both suspect something is a miss.

If you get a chance to see a restored copy of this film, jump on it. If you are a Lizabeth Scott fan, it is a must see. Scott’s Jane maybe one of the deadliest ladies in film noir. She isn’t just a femme fatale, using her charms to get what she wants, she is not afraid to get her hands dirty herself.

The Strange Love of Martha Ivers is a classic film noir from 1946. This film has a lot of unique history to it. It is directing great Lewis Milestone’s only film noir. It is also Kirk Douglas’ first film, recommended for the film by the first couple of noir, Humphrey Bogart and Lauren Bacall based on his Broadway acting. We also have “The Threat” Lizabeth Scott in only her second film. Scott may have been called “The Threat” based on her being a possible threat to film noir greats Lauren Bacall and Veronica Lake. It’s hard to say if Scott was ever really a threat to those two, but she sure held her own and has earned a right to be named with those two as some of film’s noir favorites. In addition to all this talent we have the two biggest stars of this film being the all time great Barbara Stanwyck and our leading man being Van Heflin. Heflin was coming off of a three-year leave from the movies to serve in World War II.

Our film starts out with Martha as a young girl trying to run away from her overbearing Aunt. She is aided by juvenile delinquent Sam. When Walter tells his father and the police where Martha might be, she is soon caught. After a black out and a scuffle on the stairs Martha hits her Aunt with a poker and she falls to her death down the stairs. We flash forward seventeen years as Sam, played by Heflin is driving by his old hometown, he gets in a car wreck and brings his car into town to be fixed. Sam finds his childhood friends are now prominent fixtures in the small town. Walter played by Douglas is now the D.A. and is married to Martha, played by Stanwyck, who has inherited her Aunts wealth. Sam soon meets ex-con Toni, played by Scott. There is an instant attraction, but when Toni gets in trouble, Sam calls on his old friend, the D.A. Walter to help her.

This is a great film with quite a few plot lines going on. Will Martha’s past come back to haunt her when her best friend from her past comes home? Will Sam use her to help out his new flame? How will Walter react to all of this? What will he do?

Favorite Tidbit: This film appears on the television in a scene from last years horror favorite The Babadook.

Lizabeth was in many film-noir movies and stared with all the big names.  We will be looking at more of her movies on this blog soon.  When I saw the news I checked my DVR for a classic movie with Lizabeth in it to review tonight in her honor.

Pitfall came up, so here is my review.

Scott starts as our femme fatale alongside Dick Powell in this film from 1948.  Right away I can’t believe how much Scott’s voice sounds like Lauren Bacall.  According to the LA Times, Scott was often compared to Bacall because of their similar look and voice. This movie has a great little plot and kind of ends where most films of this time would have started.  I don’t want to spoil the story so I will stop there.  I watched this on TCM and Robert Osborne had a very interesting story about how this movie was almost not released.  According to the movie code at the time a bad guy can be an adulterer, but a good guy could not be one.  This movie has that situation and director André De Toth used some sneaky tactics with the executives of the studio to show their hypocrisy.  This film is based on a book by Jay Dratler, an author that looks to have much success as a screenwriter.  I looked this book up on Goodreads and nobody has read it on there!  I took a quick look and Barns and Nobel had no copy available.  Has anyone out there read this book? The other high spot of this movie is Raymond Burr as a ex-cop, private investigator.  He really has some presence in this part and you can see his star rising in this movie.

R.I.P. Lizabeth Scott, I look forward to watching more of her work, hope you do the same.