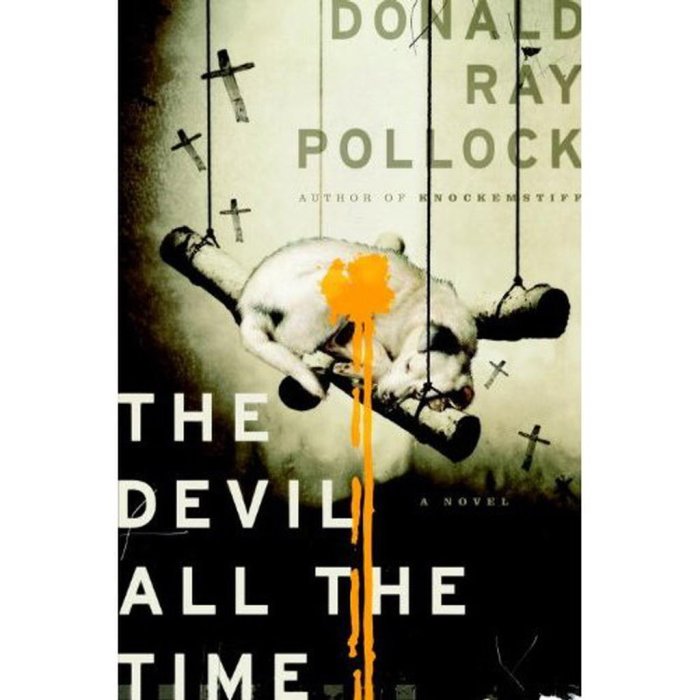 The Devil All the Time by Donald Ray Pollock is a noir stew spanning over decades and consisting of many tough characters, thrown in a pot and put on boil.

This is Donald Ray Pollock’s first full length novel, published in 2011. He had a short story collection come out in 2008 called Knockemstiff. Knockemstiff  is the town in Ohio in which Pollock grew up. Knockemstiff  is also one of the locations in The Devil All the Time. Is there a better noir name for a town? Pollock worked as a laborer and truck driver until he turned 50. He then went to Ohio State University’s English program. I guess it is never to late to become a great writer.

The Devil All the Time has many story lines that criss cross each other until the final chapter. The best way to describe this book is by the characters.

Arvin starts out a young boy, growing up in the country. His father Willard is an ex-military religious nut. Arvin’s mother is dying and Willard is not taking it well. The local Sheriff is as corrupt and crooked as they come. The Sheriff’s sister is a prostitute/bartender and is married to a serial killer. They like to make road trips and find hitchhikers to take pictures of and kill. Arvin has a grandmother who has adopted a girl. The girl’s mother has been killed and her father is the main suspect. The father and his crippled friend travel with a circus. We later run into a Pastor who is married to a young women but likes even younger women. You throw all these ingredients in and see what happens.

This book has been described as Hick Lit, Ohio Gothic, Country Noir even Horror. whatever you call it, it is a dark journey worth taking. Lets hope Pollock has many more great stories to tell. If you are a fan of Jim Thompson you will probably fall in love with Donald Ray Pollock too.