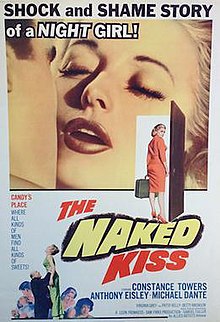 So the classic film noir era ended in 1958 according to some film noir historians, some might stretch it to 1960. I guess nobody told Samuel Fuller, because this film is about as close to a classic film noir as you get. This film is written, directed and produced by Fuller in 1963, and Fuller has done it all in the noir genre.

This film stars Peter Breck, who plays a journalist named Johnny, and is willing to do anything to win a Pulitzer. He trains with a psychiatrist to look like a mentally disturbed person when the time is right. He has a girlfriend, played by Constance Towers, who happens to be a stripper with brains and is madly in love with Johnny.

Johnny wants his girlfriend to act like his sister and tell the police that Johnny is making sexual advances towards her. So in 1963, I guess a stripper could tell a cop,” this is her brother and he is abusing me” and that is enough to get thrown in the mental hospital. You would think a background check to see if Johnny is even her brother would be done first? So we got to suspend our disbelief for a bit, but that is OK. So Johnny’s girlfriend thinks this is a really bad idea, I think she maybe right. Johnny wants to get institutionalized so he can solve a murder of a patient in the hospital. He knows there are three witnesses to the crime and one of them has to know who really committed the murder. So Johnny is deemed insane and sent to the hospital and proceeds to get close to the three witnesses as well as some of the other patients and staff members. Will Johnny solve the murder? Will he stay sane? Will his girlfriend stay with him when it is all over?

There are some very good performances in this film, but besides the two leads the one that stood out the most to me was James Best as Stuart. I’ve never really seen Best play anything by Rosco on The Dukes of Hazard, so it was a pleasant surprise to see him in something totally different.

This film is shot in black and white and it also uses a lot of classic film noir techniques for the cinematography.

The story is told with a few voice overs and delves into some dark places of the mind and our society. Finally one of my requirements for being a great film noir, this film doesn’t exactly have a happy ending. So by date alone I will file this under neo noir. On the other hand I think classic film noir lovers will actually really like this film. Forget what date is on it and just enjoy this film for what it is.