The Steel Trap is a classic film noir from 1952, directed and written by Andrew Stone. This was the second time that Joseph Cotten and Teresa Wright starred in a film together, following Alfred Hitchcock’s Shadow of a Doubt 9 years earlier. In Shadow of a Doubt they played uncle and niece, in Steel Trap they play a happily married couple.

Cotten plays Jim Osborne, an employee at a bank, where he has worked for 11 years and has moved up the ranks some. The beginning of the film shows him doing the same routine going to work, every day, over and over again.

He has a crazy idea in his head that just will not go away. He keeps thinking about how he could get away with robbing the bank and not get caught. He starts studying in the library different laws and extradition rules. When he decides to do it and run to Brazil, he takes his wife with him. His wife, Laurie, played by Teresa Wright, is our barometer of all that is good.

Cotten does a great job with the internal dialog, thinking things out and deciding what the next step is. This film really gave a sense of claustrophobia, as Jim seems to get in a deeper hole all the time and the audience roots for him to get away with the money. In the end this film asks the questions, what really makes you happy in life? and does money equal happiness? 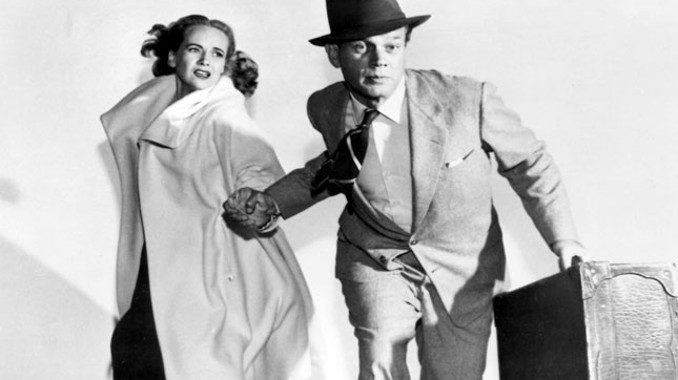 Without giving to much away, I really liked how this film was structured. I also liked the moral questions it proposes. I guess most things noir asks this question, but Jim has a little more to lose then some of our noir protagonists.

This is a very good film, and different enough to be entertaining and fresh. If you are a fan of either of the stars, or just a fan of classic film noir, this movie is worth your time. 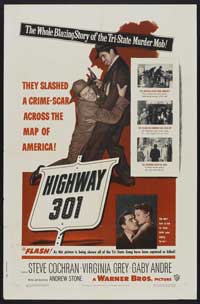 What are we suppose to do?  Sit here like mummies?

Why don’t you do something about your face, that should keep you busy for a couple of hours.

This is a great couple lines of dialog from this B-movie from Warner Brothers.

This film is titled after the highway that ran through the three states of Maryland, Virginia and North Carolina.  This gave us the name Tri-State Gang for our group of bank robbers.

When I started watching this, we had the Governors of all three states talking to you about how crime doesn’t pay.  This gave me the impression this was going to be a docudrama type film like G-men, and it was to a certain degree. I felt G-men was a recruiting ad for the F.B.I. and  thought we where in for the same kind of thing here.  Instead it focuses on the criminal gang, and then goes to show you how crime does pay!  It’s like an instructional movie on how to rob a bank at the time and get away with it!  The way crime doesn’t pay in this movie, isn’t the police or F.B.I. catching you it’s your fellow bank robbers and the women who love them that trip them up.

The one thing about this film that kind of shocked me, is the violence this gang uses.  The killing of innocent people and murdering people with big mouths in broad daylight in front of witnesses was surprising to me.  The ending also seemed very violent for a film from 1950.

This film is written and directed by Andrew L. Stone who wrote and directed many film noir’s in his career.  George is our main baddie and is played wonderfully by Steve Cochran.  You hate him the whole movie! 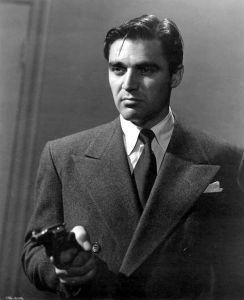 Gaby Andre plays our second female victim of George and is the only character we feel some sadness for.  Virginia Grey plays another of the girls in the gang who seems to be caught in a web of lies.  Our detective on the case narrates the story of our gang and how he finally caught them.  The detective is played by Edmon Ryan.

The story of this film shows the Tri-State Gang pull off a successful bank robbery and then a not so successful armored car robbery.  We soon meet the ladies that love the gang and one talks a little too much at a night club and things start to unravel for the gang.

This movie has flashes of brilliance and is a good little B-movie noir and worth a view for hardcore noir fans, and we learn “Don’t dance with strangers or talk to anyone with a mustache.”

Favorite Tidbit:  There looks to be a real Tri-State Gang in the 1930’s, not sure how much of the movie is based on fact, but it looks like 3 of the Gang where eventually sentenced to death.