All Due Respect and Greg Barth are at it again! Diesel Therapy is book two in the Selena series and does not disappoint.

We find Selena paying for her crimes from the first book. She finds herself in a Federal Prison at the beginning of the book and that is paradise compared to what is to come. She soon finds herself in Diesel Therapy, a method of torturing prisoners…legally. They shackle and handcuff the prisoner, who is then transported from one institution to the next. As we learned in book 1, Selena is a tough cookie, but Diesel Therapy breaks her down. One night Selena meets a girl from back in her home town in a small town jail. She soon learns, the cause of Selena’s troubled youth is still going on. Revenge on those causing young women their pain drives Selena. This includes her Father and Uncle, as well as a handful of the evilest men you will ever come across outside a horror book.

Will Selena escape or get out of her tortured prison to seek revenge? Will she find help along the way?

The look at a violent and evil backwoods Southern breed of men is pretty dark on its own, double that with the torture Selena is going through makes for another gritty and dark pulpy noir story. If this sounds like a brutal story, I actually think book 1(simply titled Selena) is even darker and more violent. If you want to journey into the depths of the darkness, start with Selena and continue with this book. Selena is a character I look forward to reading more of, and we will not have to wait long, as book three is scheduled for release later this year. 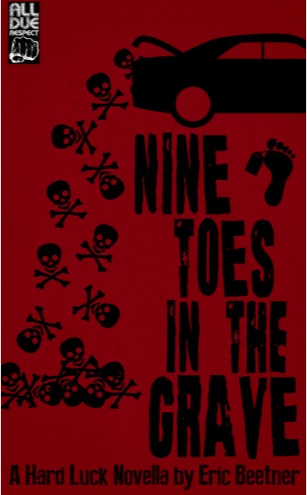 Nine Toes In The Grave is “A Hard Luck Novella” by Eric Beetner. I have seen Beetner’s previous novel Rumrunners on more then one “Best of 2015” list. This, and with the folks over at All Due Respect sending me a copy of Nine Toes In The Grave, put this book to the top of my “To Read” list. This book is short, at just over 100 pages, but packs quite a story.

Beetner starts this story with a bit of a “The Postman Always Rings Twice” vibe. Our protagonist Reese is working at a greesy spoon as a short order cook. He is having an affair with the owner’s wife to start his downward spiral of bad luck. She tries to convince him to kill her husband so she will inherit the restaurant. Reese has always done the right thing and been a good guy and refuses to do this. The wife kills her husband anyway and looks to frame Reese. Reese figures his best bet is to run for it.

Reese makes it 50 miles to the next county and hits up a bar. Out of money and nowhere to go, Reese meets two guys willing to pay him $500 for a repo job on a car. It seems like easy money and Reese agrees to do it. His luck does not get any better is all I have to say.

Beetner tells a good story and it is well written. I will be looking for more from Beetner in the future. If you want to read some good modern pulp, Beetner is as good a place to start as any.

You can pick up a copy of this book and others from All Due Respect here:

Selena, written by Greg Barth is another fun pulp noir from the publisher All Due Respect. When I started reading this book, I didn’t know if Barth was a genius who understood damaged young women, or a writer making a strong but flawed female character. Is Selena an unreliable narrator? Could a character be this damaged yet this strong? Was Barth just writing some sick twisted male fantasy of a woman? I didn’t know and still don’t, all I know is I couldn’t put down the book and had to force myself to, or it was going to be a sleepless work night.

This book is split into three parts and each part has a different feel. The first part is a brutal revenge noir, the second is a country noir, and the third is a survival noir. All three parts are told in the first person by Selena herself with the exception of the third part which bounces from first person to third person and back.

Selena is an interesting character that has gone through a lot. She is a stripper, prostitute, alcoholic who occasionally partakes in drugs and was an abused child. Her Mother died when she was young and she has been struggling ever since. The book opens with Selena waking up from a one night stand and when she steals some cash and a CD, things get dark fast. Something is on the CD, but she doesn’t know it. She is attacked at the strip club she works at and is brutally beaten and raped. When she recovers and sets out to get even, we are lead on a violent journey where one act of revenge escalates to another, until we are in an all out war.

Selena is about as damaged a character I have ever read. As I was reading this, I couldn’t get past thinking if this character was based on any possible truth. After a few hundred pages I stopped analyzing Selena and just sat back and enjoyed the ride she took me on. After all this is pulp fiction, it doesn’t have to be based on any kind of reality.

I will warn you, this is a very brutal and violent book. If you are squeamish, this may not be the book for you. If you like your sex, drugs and violence brutal and bloody, you will enjoy Selena. Thanks to All Due Respect and Greg Barth for another dark pulpy entertaining book and can’t wait to tackle the recently released sequel Diesel Therapy soon.

Both books are available over at http://allduerespectbooks.com/

Criminal Love and Other Stories by Mike Monson is a hodge podge of a book. The first third is a collection of short noir tales. Some of these are as short as a few pages long. The stories pack a punch and some would make a great premise for longer stories or even novels. It is amazing how much story Monson can put in just a few pages. Most of the tales take place around Monson’s current home of Modesto, California, but one standout tale for me was “An Evening in Sin City.” This story is about a couple on vacation in Las Vegas. When the wife just wants to stay in the room and watch the same old reality television she would be watching at home, the husband decides to go downstairs and play some craps. When he wins big and catches the eye of a young attractive women who looks like Cher in her youth the story really takes off and doesn’t end the way you would think.

The middle third of the book is some short stories of Monson’s own experiences working at different locations. Some of these are humorous and some insightful and some are just disturbing how big corporations see their employees.

The last third of the book is a few interviews with crime authors. The four authors interviewed are Tyler Dilts, Jason Starr, Jake Hinkson and J.A.(Julie) Kazimer. I have not read any of these four, but look forward to checking out their work based on these interviews. It was interesting to see how different and how similar all of them are.

So the book is very entertaining in a variety of ways. Some may find only one or two section of the book to their liking, but the whole book is worth reading. All Due Respect does it again with another great entry in the noir genre! I haven’t read anything from these guys that I did not like yet. I look forward to reading more from this publisher in the future. Check out their website for all the books they have available.

Two Bullets Solve Everything is a double feature of noir novellas from All Due Respect.  Both stories are quite different from each other and unique in their own right.

The second story is A Pack of Lies by Chris Rhatigan.  This story is about a small paper journalist, who is past his prime and basically going through the motions at his job.  He also bribes people to keep their stories quiet.  This story has him doing this twice, the first one may have him lose his job, the second may cause him to lose everything.  A Pack of Lies is interesting as our protagonist starts out in a bad place, but in control and we witness him make one bad decision after another on his downward spiral.

I really liked the first story and really loved the second story.  Disco Rumble Fish is action packed and has some good humor.  A Pack of Lies kept me turning the pages and looking at how few pages where left and kept wondering “how is this going to end?  Are there enough pages left to complete this story?”  The tension was strong and kept me on the edge of my seat all the way to the end.  I think noir fans will really like both of these stories.  All Due Respect delivers again with this book.  Check out their website for this book and other great books here;

I can’t wait to read more from this little publishing house!  Thanks for getting these great noir stories out to the masses!

Love You to a Pulp is another great book from the small publisher All Due Respect.  This one is from C.S. DeWildt.

The story telling here is very interesting, it tells two stories, alternating from chapter to chapter.  Both revolve around our hero Neil.  The first story is about our adult Neil, a glue sniffing down on his luck, hardboiled private detective.  The second story is about a teenage Neil growing up.  I found this interesting because we find how he was raised and why he is a glue sniffing adult.

Like all the noir fiction I’ve read from All Due Respect, this book is very dark and this one made me cringe more than once.  The story starts with Neil taking a case from a father who wants his daughter back in his life.  The daughter and her boyfriend have ripped him off, the father owns a pharmacy and the pair has taken a bunch of drugs from the store.  He doesn’t want his daughter to get in trouble, and wants her taken away from her boyfriend.  The second story shows Neil growing up with his pimp father and whore mother.  To make a few bucks, his father enters him into illegal fights, reminiscent of dog or cock fights, but with young boys.  We learn as the story goes on and gets darker and darker how Neil grew up to be a man.  We also take a crazy voyage in the present, with Ex-wives, lawyers, shady motels, drug deals, suicides, strippers and on and on.

I enjoyed this book immensely, the characters were interesting and most were more twisted than Neil if you can believe that.   I think it is safe to say, after three books, if you have a weak stomach don’t read anything from All Due Respect.  If you like to go deep down that dark rabbit hole, All Due Respect is your one stop shop.  This is another amazing original noir for the hard-core fan.  I look forward to reading more from DeWildt and hope to soon.  Check out All Due Respect’s website to find this and other great books.