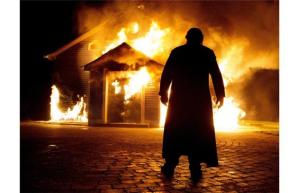 Calvary opens in a confessional as the confessor tells the priest he is going to kill him in one week.  The confessor tells him he was raped by priests for 5 years and now he is going to get payback.  Our protagonist is not a rapist, he is a good priest, and that is why he is being targeted.  Our unknown villain wants to kill a good priest, because killing a bad priest would not bring as much attention.  Our good priest is played by Brandon Gleeson who fits this part well.  We follow him through out his week as he talks to his parishioners in a small Irish town. Our hero goes through many trial and tribulations through out this week, all these make him question his own beliefs as evil seems to close in on him.

The supporting cast is an eclectic collection of people.  Along the week he engages with all these people, each losing their own way in the Catholic Church for a variety of reasons.  I would love to go into these, but I think that will take away from this film.  All I will say is Chris O’Dowd, Kelly Reilly, Marie-Josée Croze and Aidan Gillen play four of the best supporting characters.  This covers some dark material, many of which would have to be covered when dealing with the Catholic Church, but it also shows how between the Church and the economy, small town Ireland is in a bad place.  This really delves into what is good and right and what is wrong and evil, as well as what is a sin in today’s world.  John Michael McDonagh writes and directs this film, it is his 3rd movie and I look forward to his 4th movie, War on Everyone.  War on Everyone has a great concept and a cast that includes Garrett Hedlund, Guy Pearce and Michael Peña.

I think this trailer sums it up well without spoiling too much:

This movie is something very original and I think you will enjoy it.