This is a film noir from 1950, directed by John Cromwell, but the real story is who wrote this and how.

This is another great noir written by Virginia Kellogg who also was on the writing team for White Heat and T-Men(both have been reviewed earlier on this site).  This one is interesting because Kellogg actually pulled some strings to incarcerate herself in a woman’s prison to write a book.  She then made this book into a screenplay for this film.  Everything in the book is stuff that really happened while she was in prison, so I imagine most of this movie’s plot lines are actually based on fact, though the story is fictional.

Eleanor Parker plays our main protagonist who is put in prison for being involved in a gas station robbery with her husband.  She is only 19 and her husband was killed in the robbery attempt, to top things off, she is pregnant!  She is a pretty normal girl, somewhat innocent if you will.  She probably shouldn’t be in prison for being an accomplice to an attempted robbery of only $40.

Agnes Moorhead plays the warden who is trying to make things better for the women.  She is the bright spot in a dark situation. 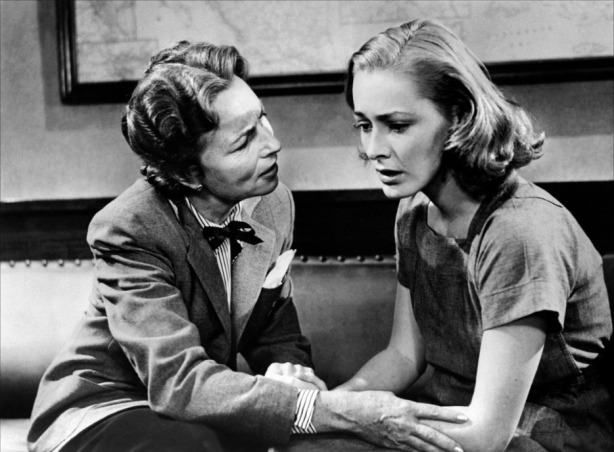 Hope Emerson plays one hell of an evil guard in this film.  She was Parker’s nemesis throughout the movie.

Parker meets an assortment of criminals while in stir.  Most befriend her and she learns a lot about the criminal ways while doing her time.  This quote sums it up:

“For that forty bucks I heisted I sure got myself an education.”

This really is a movie about the problems with our prison system, most, if not all these problems have not gone away in the 65 years since this film was made. If you are a fan of Orange Is the New Black you should check this film out to see how things have evolved very little in the past 6 decades.  This film should be seen by everybody, noir fan or not.  It is an amazing piece of cinema. Parker really does an outstanding job and you can see why she was nominated for an Academy Award for this performance.

14 Hours is a film noir from director Henry Hathaway and a screenplay by John Paxton based on a story by Joel Sayre.  The story revolves around a police officer played by Paul Douglas and a man on a ledge threatening suicide played by Richard Basehart.

This story starts with our police officer on the street giving out parking tickets when he notices a jumper on the ledge of a hotel.  He goes up to talk to him and is the first cop on the scene.  He talks to our jumper for a bit before the higher-ups get there and tell him to go back down on the street.  Our jumper soon says he will only talk to the original police officer so they go and find him on the street and bring him back up to the ledge. Will our hero flat foot cop be able to save the day and talk our jumper down?  Why is our jumper on the ledge? 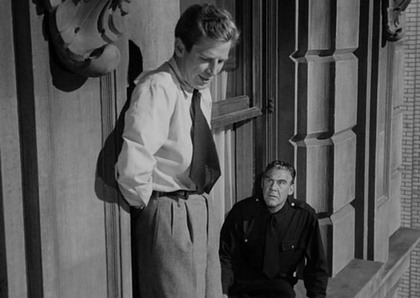 Barbara Bel Geddes shows up as our jumpers girl and Agnes Moorhead also stands out as the over bearing mother of the jumper.

We also get some minor stories from the people down on the streets of New York.  This shows the effects of this spectacle on those folks.  One of these small sub plots is what made me so excited to see this.  We have Grace Kelly in her first film role, as a wife on her way to a lawyer’s office.  We see flashes of future brilliance here as the jumper has blocked traffic and made her late.  Then as she is across the street in the lawyer’s office she can see the jumper on the ledge out the window as she waits for her meeting to start.  I don’t know how I missed this film with her in it.  I went through a Grace Kelly phase after seeing Rear Window for the first time and had to see everything with her in it.  This one slipped under my radar some how.  I guess I still am in a Grace Kelly phase, but who isn’t?

Another sub-plot is the taxi drivers who are basically stuck in traffic and out of work for the day.  We also have a young women who would like to help but doesn’t know how.

The way this was filmed is really well done.  We have some great shots from the street up to the jumper and some from high up in the building down to the crowds on the street.  It has some very interesting cinematography worth checking out.

This is a slightly above average film and average film noir worth watching for Grace Kelly fans, even if it is a small role.  Classic noir fans will like it as well and those wanting to see what New York City looked like in the early 1950’s.

Favorite Tidbit:  Though 2012’s Man on a Ledge is not a remake, it does have a lot in common with this film.  Both take place in New York on a hotel ledge.  I also noticed a lot of the same quotes and similar actions of the New York crowd on the street.  Man on a Ledge is also a very good film I will have to re-watch and review it soon.