The Bad Sleep Well is a film noir from acclaimed director  Akira Kurosawa, released in 1960. Kurosawa maybe more known for his epic samurai films, but he did a handful of films noir.

This film starts out with an elaborate wedding, complete with a few arrests, some interesting toasts, and a flock of reports looking for a story as they tell us a little bit about the background of a few of the characters. This opening scene can be a bit overwhelming with the audience thrown into the middle of an intense scene with a ton of characters introduced and a lot of information in only a few minutes. While this scene maybe hard for the audience to keep everything straight, it is worth paying attention for the story to come. 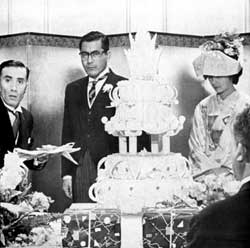 From this scene we learn a man is marrying a handicapped woman who is the daughter of the Vice-President of a major corporation. The wedding party has members of two major corporations in attendance and they seem to be partners in some illegal activities together. Turns out to be fixing bids for government jobs. A suicide from 5 years ago is brought up by one of the reporters as well as a wedding cake that references this suicide.

As the film continues we learn of an intricate revenge plot on the corporation. This film is interesting for a number of reasons. The plot is intriguing as you want to find out what will happen. We also learn about the Japanese corporate structure and how Japan looks at suicide as a honorable way of saving your bosses and family.

Kurosawa uses William Shakespeare’s Hamlet as a structure for this film, and it has a Shakespearean feel to it. This is a long film that takes your full attention while you watch it, but it is worth it. Whether you are a fan of Kurosawa, a fan of Asian noir, or just a fan of great film, this is worth your time.