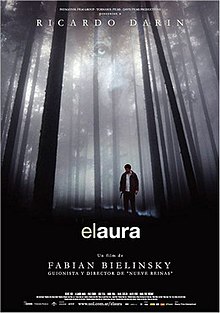 The Aura is a neo noir from Argentina written and directed by Fabián Bielinsky. Bielinsky was not a prolific director, being this is only his second full length feature film, the other being Nine Queens from 5 years earlier. Unfortunately Bielinsky died in 2006 of a heart attack at only 46 years old. I wish we had more than two films written and directed from this great talent, who knows what we would have seen in the years to come.  This film was released in 2005 and appeared at the Sundance Film Festival in 2006.

This film stars Ricardo Darín as an epileptic taxidermist. He has fantasies of grandeur, with a hobby of planning the perfect criminal heist. Darin is very good in this film, one moment coming across as a friendly man, then turning and saying something with a bit of bite the next moment. He also seems very intelligent for the most part with a bit of good luck on his side from time to time. After meeting a friend at a museum where both are working on some taxidermy projects. They decide to go on a hunting trip together, but when all the rooms are taken in the small town due to the local Casino they get a cabin up in the woods. When they go hunting our hero makes a terrible mistake and all hell breaks loose for him.

I don’t want to go into much more on this films plot. Though the film starts out a little slow, when the twists and turns come, they are hard to see coming and take the noir fan on a wild ride. We don’t know where or when it will end.

I really enjoyed this one, it has a very good story with some high level cinematography. The dog in this film is amazing, not sure how they got this dog to act the way he did, but it sure made a nice element to this film. I would recommend this film to all film lovers that can handle a movie with sub-titles. After watching this film I hope to watch Nine Queens soon.

Favorite Tidbit: It looks like this film has a Hollywood remake in development. His first film Nine Queens also got the Hollywood treatment and was named Criminal.