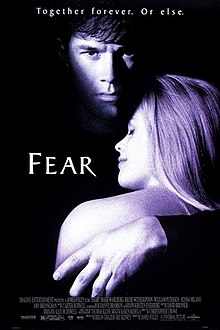 Fear is a film from 1996 with a two young actors getting their start in the movie business. I think both of them have done pretty well since this film. Mark Wahlberg was more well-known for being a rapper at this time then an actor. This was his first starring role after having a few supporting roles. Reese Witherspoon had a few starring roles under her belt by this time, but most where in low-budget films. This was these two stars introduction to most film goers.

Our two stars were put in pretty good hands with James Foley directing, coming off directing an all time classic Glengarry Glen Ross. Foley has had a pretty good career in the thriller and neo-noir genre. With some classics under his belt and a few misses this one falls somewhere in-between. We also have veterans William Petersen and Amy Brenneman playing Witherspoon’s parents. Alyssa Milano who had already been in the spotlight quite a bit by this time in her career stars as Witherspoon’s best friend.

Fear starts out with our two best friends accompanied by their male friend to a coffee shop in the wrong part of town. This is where Wahlberg catches her eye. We soon realize that Witherspoon lives in an overprotective house while her best friend runs free. Wanting a taste of her friend’s freedom, she soon joins her to go to a party. Here she meets and talks to Wahlberg and after a fight breaks out and the police come in, Wahlberg is her knight in shining armor as he leads her out of the mayhem to safety. A young romance starts until Witherspoon sees a side of Wahlberg that scares her. He is violent and bets up her male friend out of jealousy. This starts a chain of events which pits Witherspoon’s father, played by Petersen and Wahlberg against each other for the love of Witherspoon.

I really liked this film when I watched it back in the 1990’s and after re-watching it I still do. After revisiting it, I can see glimmers of greatness to come. I thought Wahlberg was great as the psycho boyfriend and have always enjoyed his work. Witherspoon  shows her charm and you easily side with her in this film. I also thought Milano was great as wild and free friend that makes some bad choices. Petersen is always good in these thrillers as the average joe that rises to the occasion.

This film is worth watching for fans of Witherspoon, Milano and Wahlberg. It is also a must see for fans of Foley. If you are looking for a modern noir thriller it is worth a look.