Thieves’ Highway is Jules Dassin’s last Hollywood film before he moved to Europe. He became blacklisted after refusing to testify before the House Un-American Activities Committee. This is an amazing film and America lost a great director to the old country as he went on to even make more masterpieces over seas. 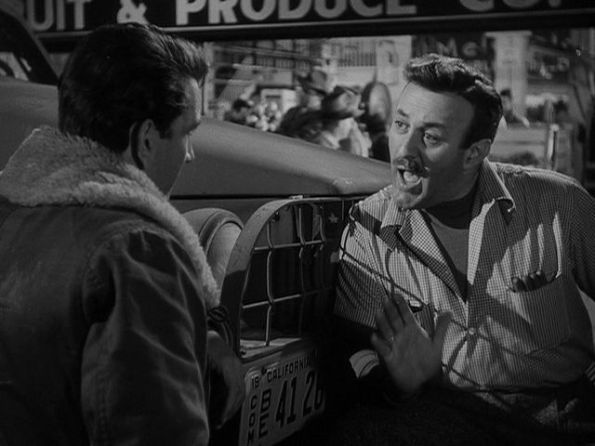 This film stars Richard Conte as our hero. He comes back from traveling the world and has earned enough money to come home, get married to his girlfriend played by Barbara Lawrence and start his own little business. Unfortunately things have changed as his father has lost all his money and his ability to work. This is all do to a crooked fruit vendor up in San Francisco played by Lee J. Cobb. Conte vows vengeance for his Father and teams up with Millard Mitchell to buy some apples and truck them to San Francisco to make some money. Along the way our hero meets truck driver and overall fun-loving good guy Slob played by Jack Oakie. He also runs into Rica played by Valentina Cortese. Is Rica a femme fatale or does she have our hero’s best interest at heart? Will our hero get his revenge? Will he get burned by the same man who took advantage of his Father? Will his partner double cross him before he even gets to San Francisco?

This is an amazing film worth watching if you are a film noir fan or not. Conte and Cobb are at their best in this one. I also really liked Mitchell and Oakie in their smaller parts. Also look for a small appearance by Hope Emerson. All noir fans need to see this. I have seen a few of Dassin’s other films and have loved them all. I will be seeking out more of his work in the near future.