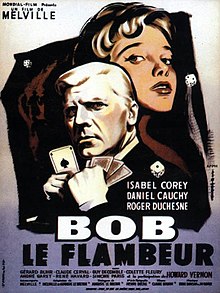 Bob le Flambeur is a French film noir from Jean-Pierre Melville. Melville also came up with the story and co-wrote the screenplay.

This story has a lot of characters and plot lines, all of which revolve around Bob, played by Roger Duchesne. Bob is a gambler and has had many successes, but is on a losing streak and is about out of money. We see him go through the night losing money at one casino and then another. As he goes through the city we meet our femme fatale, the young Anne played by Isabelle Corey. Bob’s young protegé, played by Daniel Cauchy, meets him for drinks. A pimp played by Gérard Buhr, bursts into his apartment in the middle of the night. The Pimp needs some money to leave town, he has beat up one of his girls and put her in the hospital. The pimp is afraid she will press charges this time. We also meet other characters like the cop who Bob saved from being shot years ago, and other gangsters and con men.

When Bob is out of money, he comes up with a plan to rob a casino. He uses his connections to set up a team of robbers and con artists to help him pull it off. Can a gang of outlaws work together to rob a casino? Will somebody double cross the team? Will Bob’s gambling get in the way?

This is a very good film, a film with a story I thought I had seen before, and I guess I have. This film has been remade as The Good Thief by Neil Jordan. It also was an influence on Sinatra’s Ocean’s 11 as well as Soderbergh’s re-make.Quentin Tarantino says this is his favorite gangster film and was an influence on Reservoir Dogs. Stanley Kubrick says he stopped making crime films after this movie, saying he could never top this film. It is also Jim Jarmusch favorite film. So needless to say this film has been an important influence on many of the great film makers of today and has been cribbed for some of the best heist films since its release.

So if that doesn’t make you want to check it out I don’t know what will. If you haven’t seen it in a while, re-watch it to see if you can pick up on how this movie touched so many movies that came after it.