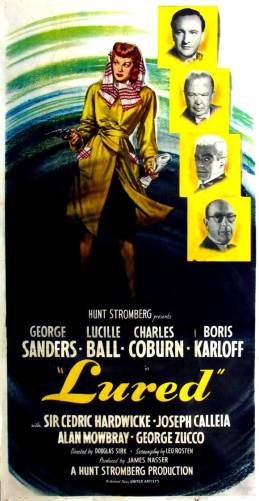 Lured is a film noir from 1947 directed by Douglas Sirk.  This is based on the 1939 French film, Personal Column. This has two legendary stars, both not well-known for their noir films.  Lucille Ball known more for her comedy and Boris Karloff for his horror films.  Though Ball shows some humor in this and Karloff plays an insane artist that is scary at times this is not the norm for our stars.

Ball plays Sandra who is a dancer from New York that is stranded in London after the show she was in goes bust.  Her friend goes missing and she goes to Scotland Yard with a personal ad from the news paper that her friend answered shortly before her disappearance.  Charles Coburn plays an Inspector that recruits Ball to work undercover to find the “Poet Killer.”   Ball has many strange run ins answering personal ads trying to find the killer.  We have many suspects including Karloff.  Ball also falls for rich night club owner Robert Fleming played by George Sanders.  We have many red herrings and suspects to choose from and the audience doesn’t know who the serial killer is until near the end of the film.

I got to admit I’ve never been a big Lucille Ball fan. With this movie and The Dark Corner (which I hope to re-watch and review later) I really wish she would have done more films like this.  She was a very talented dramatic actress with enough charisma to hold her own on the big screen.  In this film she plays a beautiful dancer that everybody likes or loves, and you can see why.  Ball plays a witty and smart character as she ranges from being scared to death to falling in love and you totally buy it. 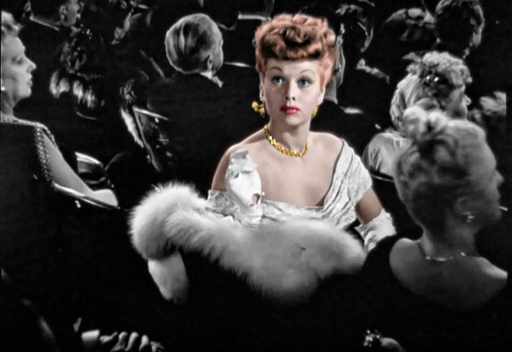 If you can suspend your reality and get past Scotland Yard recruiting and hiring an American dancer to go undercover based on a 5 minute conversions you should enjoy this film.  If you are hesitating to watch this because you don’t see Ball or Karloff in noir, don’t be.  Very good movie worth a watch.