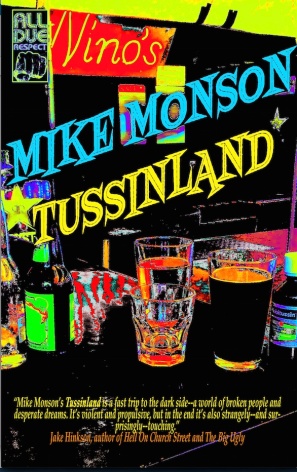 Tussinland by Mike Monson is another great pulpy noir from the guys at All Due Respect books.  What a ride!  this book starts out with our main character Paul Dunn getting wasted on Robitussin, hence the title of the book.  Paul lives with his mother after loosing everything he had, job, wife, kids, house, all gone!  We soon find out that his wife and new boyfriend are slaughtered, each shot twice at close range with a shotgun.  Paul is soon the main suspect in the crime and he is off on a task to find out why his wife was murdered and why they are trying to frame him.

Paul is part of the most dysfunctional family I’ve ever come across in literature.  His mom is a beautiful women and knows it, she seduces men often and her family has grown OK with that, oh yeah she also likes her vodka.  His sister is married to a pastor of a new church, the church believes one thing, if you are a white male heterosexual who packs a gun you are a good christian.  Their daughter, Paul’s niece, is a smart girl, but has lost interest in school after meeting her boyfriend.  Her and her boyfriend like sex and drugs, and don’t mind filming the sex for others entertainment.  They hope to make a career in the adult industry.  Paul’s stepfather is the most sane of the bunch.  He left Paul’s mom and has found happiness with a much younger man who he has married.  And that is just the family!  We have an alcoholic cop and a pair of used car salesman that dabble in heroin distribution to throw in the mix.

Modesto California is the city where the author lives and the story takes place.  I’m also currently watching the television series American Crime which takes place in Modesto also.  Modesto sounds like a town that has been hit hard from the current recession.  Modesto, like all good noirs uses the city almost as a character in the story.  I found Modesto itself has as much to do with putting Paul into his current situation as the people around him.

This is a great book for anybody that wants a modern pulp noir to read.  You can get a copy at:

Also Mike Monson was the guy that was nice enough to send me some books from All Due Respect and has a great blog as well.  Check him out at: