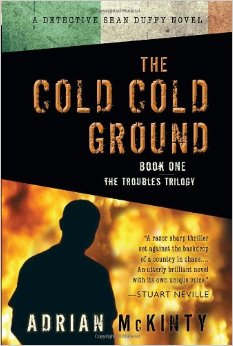 Cold Cold Ground by Adrian McKinty is an Irish noir that takes place in the early 1980’s.  McKinty grow up in Northern Ireland during this harsh time, so the background in which our story takes place is from somebody that lived it.  I had very little knowledge of the climate in the early 1980’s in Northern Ireland, but this book gave me some real historic insight of that turbulent time.

Some of the real life history that is happening during this novel is the Princes Di and Prince Charles wedding, something I do remember, because even though I was young this was on every magazine cover and newspaper headline at the time as well as live coverage on every television channel, all two of them!  So if you where home on that day watching television, you got to see the wedding whether you wanted to or not.

Unfortunately I did not know much about the real news of the time with the hunger strikes, the riots, and the fighting among the Protestants and the Catholics.  As well as England’s attempts to stop all this without siding with terrorists in any way and Margret Thatcher being the head of that balancing act.

A review I recently read, didn’t like the historic facts going on in the background of this story.  I actually learned some from this and didn’t mind the background facts, but did find this made the book a little long and took me longer to get through it than normal.  This was the same way with James Ellroy’s American Tabloid and the first two Coughlin books by Dennis Lehane.  All these books I felt like “When will this book end?!?” but after I was done, I felt like “I sure am glad I read that!”

This is the first of the Sean Duffy books and there are 4 books in the series with the 4th just being released.  After reading all the great reviews on like-minded blogs and on goodreads, I had to jump in and start the series.

The story is Sean Duffy is Catholic and has recently started working in a small Northern Irish town with a mostly Protestant police force.  A dead body is found in an abandon car with a gunshot wound and the hand cut off.  It is soon found out that the hand they found with this body is not from the same person.  They soon find the other body the hand belongs to.  The pattern shows homosexuals are being targeted by a serial killer. Our detective is also given a second case of a young women that appears to have committed suicide in the forest.  Duffy just doesn’t feel right about the suicide, and starts asking questions.  Where has she been for the last 6 months?  Is her ex-husbands incarceration and announcement he is starting a hunger strike have something to do with it?  As our story goes on and the more we learn the more questions we have.

This is a very good book and I look forward to reading the rest of the series.  I do have to take a break from Duffy for now, this is not a light read, but I will be back soon.