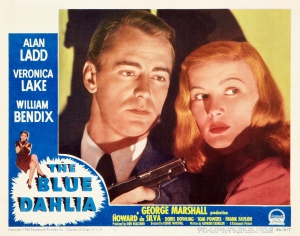 So did anybody write better classic noir dialog than Raymond Chandler?  I don’t think so, his wise cracking P.I. Phillip Marlowe will always be one of the greatest fictional character of not only noir, but all of fiction.  Though we don’t have Marlowe in The Blue Dahlia, we are not missing on the crackling dialog.

Clean sheets every day they tell me.  How often do they change the fleas?

Seems I’ve lost my manners or would anyone here know the difference?

You’ve got the wrong lipstick on, Mister.

I know I’ve got lots of faults, but being in love with you isn’t one of them, is it?

These are some of my favorite quotes from this film, and if it was just the dialog this would be a 4 out of 5 star film.  But Raymond Chandler doesn’t just write great dialog, he can put together a pretty good plot too.  This has three friends coming back from the war. Our hero is played by Alan Ladd, who goes to see his wife.  She is having a party and he soon finds out that she has a new beau.  The new boyfriend played by Howard Da Silva, owns the night club “The Blue Dahlia” for which the movie is named.  Soon our hero’s wife played wonderfully by Doris Dowling, she is just the right amount of evil that we can see why our hero wants free of her, but also the right amount of sadness that we feel sorry for her having to be by herself while her husband was at war.  She’s mad, but we understand why.  She is found dead and we don’t know if it’s suicide or murder.  The police start with the most likely suspects, which includes our hero.  Now he has to find the killer before he takes the fall for murder.  Along the way we have William Bendix playing Buzz.  Buzz is a great character who has some brain damage from the war, does he also have post-traumatic stress syndrome before we really knew what it was?    Then of course we have Veronica Lake who plays the night club owners wife.  I would call her the femme fatale of this film, but she doesn’t try to decisive anybody, or use anybody, or try to get away with anything, she’s actually a truly good person.

Raymond Chandler had to change his original ending and was not happy about this.  I will not tell you why or how it is changed here, because it is a spoiler and we don’t believe in that here, but after you watch it you can probably see what is changed and maybe even why given the time frame of when the film was made.

A couple of historic trivia bits for you.

1.  Alan Ladd and Veronica Lake appeared in a number of movies together and rumors started that they where having an affair.  Both always denied this, and it is not known if the rumors where true or not.

2. Elizabeth Short got her nickname The Black Dahlia from this film.  She embraced her new nickname and took to wearing a black dahlia flower in her hair.  She died less than a year after this.  She became the subject of the classic James Ellroy book and not-so classic film, “The Black Dahlia” and part of Los Angeles lore forever.

I really liked this film for its sharp dialog and surprising twists and turns.  A classic noir that all fans should see.

3 thoughts on “Review: The Blue Dahlia”