Skip to content
HomeReview: A Scanner Darkly: Movie versus Book 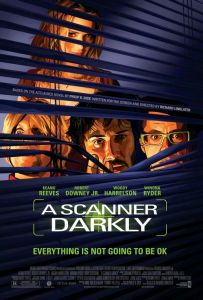 Scanner Darkly is a book by Philip K. Dick, a SciFi legend in literature.  Dick may be one of the earliest writers to combine the science fiction genre with noir style.  If you are not familiar with Dick as an author you are familiar with his work.  His most famous work is probably “Do Androids Dream of Electric Sheep?” but you will recognize its big screen neo-noir adoption “Blade Runner.”  I hope to review both that movie and book on this blog at a later time.  Scanner Darkly may be less science fiction and more noir then his other works.  It is also his most personal and autobiographical book.  This book may disguise itself in a fictional world, but it is very close to Dick’s personal life under the influence of drugs.  Him and his friends are paranoid of everything and don’t know who to trust in their everyday lives. Substance D is the drug in the world of Scanner Darkly and our protagonist Bob Arctor is an undercover cop in this world.  This book, written in 1977 won many awards in the science fiction literary world.

I watched this movie back when it came out, recently read the book and then re-watched the movie to compare the two.  I can see why most thought this book would not be film-able.  The scramble suits would have been my main concern if I was a fan of this book in the 70’s and found out someone was going to try to put it to film.

Then enters one of the best directors in modern film, Richard Linklater.  Though Linklater doesn’t typically do much noir type films, he has made some of the best independent films of the last 25 years.  Linklater takes some risks, but I really liked the final product.  The biggest one is taking one of the biggest, most talented casts around, shots the film with them over the course of 23 days, then spends 18 months animating it.  This gives the film a very cool look, almost in the way black and white transformed the real world in the classic era of film-noir the animation transforms the modern world of southern California. 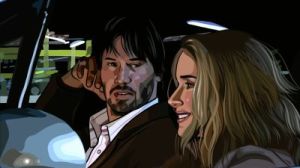 The cast of this doesn’t get much better.  Robert Downey Jr. may be the biggest star in this film, but when it was made he was still doing little movies while he worked through his own drug issues.  This is great casting and if you like Downey you will like him in this part.  Our lead is played by Keanu Reeves, playing the undercover cop that maybe to undercover for his own good.  He is in love with Donna, played by Winona Ryder, unfortunately she may not feel the same way. Woody Harrelson plays a friend of Bob, that is also addicted to substance D.  Rory Cochrane, a Linklater favorite also plays a key role.

So should you read the book or watch the movie?  I will say if I had to choose one, I would go with the movie.  The book and movie are both great and if you can, I would look at reading the book and then watching the movie.  This is an interesting take on the underground drug world of the 1970’s, and a neo-noir classic.

3 thoughts on “Review: A Scanner Darkly: Movie versus Book”