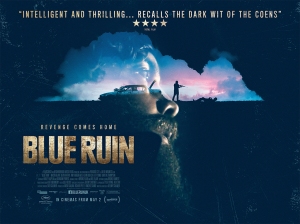 Blue Ruin is a film made by two friends on a small budget…and it makes it even more gritty and dark because of it.  This is a southern neo noir that has a simple story that will twist and turn as you go.  Though we only really get to know the main character Dwight played by Macon Blair, an average guy in every sense of the word.  Dwight is homeless at the beginning and wants revenge on a man who killed his family.  He has no experience dealing with weapons, he’s not an ex-gangster or any kind of bad ass at all.  He just needs revenge for his family and has no idea how he’s going to do it, he just knows he has to.  This is noir in the best sense, it’s a character put in a situation over his head, now what is he going to do to get out of it.  Jeremy Saulnier is a great talent, he wrote and directed this film and is already working on his next movie “Green Room.”  I look forward to seeing this when it is available.  The one supporting character I loved is Ben Gaffney played by Devin Ratray.  Ben is a bad ass!  He had some of the greatest lines and had an interesting look.  Hard to believe that Devin played Macaulay Culkin mean older brother in Home Alone and Home Alone two.  Amy Hargreaves as Sam,Kevin Kolack as Teddy and David W. Thompson as William all stood out in the film. The reason I checked out this film is, it was on a bunch of blog posts by other people into crime, hardboiled and noir movies.  This made a lot of their top 10 lists, so I had to see it.  Glad I did!

This movie got big praise at Cannes as well as a lot of smaller film festivals throughout the world and nominated for some Independent Film awards.  It is definitely worth a look, I hope you enjoy it.