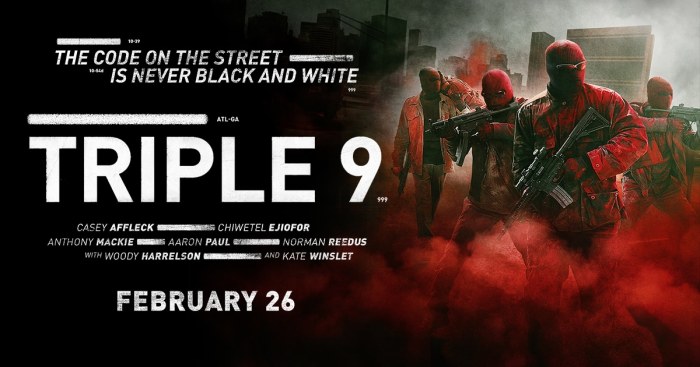 When you live in a small town in the middle of nowhere, life is pretty great 99% of the time. The 1% it isn’t that great is when you want to see that small film on the big screen. In this case I drove 100 miles in one direction to see a film on opening weekend that I have been excited to see for months now. Sometimes the movie going general public surprises me. Here is a film that stars…well lets just say this film has so many great actors in it, it maybe easier to list who wasn’t in it. The film opens on the same weekend as the “blockbuster” Gods of Egypt, that happened to be this year’s first flop(who didn’t see that coming?). I really thought this crime noir might surprise the box office. Triple 9 finished 5th at the box office this weekend with $6.1 million and very little coverage and fanfare. With a budget of $28 million, this is far from a hit, but should still make a decent return on investment after its full theater run and DVD release.

So is this film worth going to the theater for or should you just wait for the DVD release to watch it at home some quite night?

This film has a great ensemble cast with a lot of noir fan favorites. Casey Affleck plays the clean cop that wants to make a difference. Woody Harrelson plays his Uncle who isn’t such a clean cop and has a lot of power in the police force. Chiwetel Ejiofor plays the head of the team of thieves who is not just doing this job for the money, but to save his son. Gal Gadot plays the mother of that son and her sister runs the Jewish Russian mob.  Kate Winslet plays the sister that is the head of the Jewish Russian mob. Anthony Mackie, Aaron Paul, Norman Reedus and Clifton Collins Jr. make up the heist team, some are cops, some ex-military. As a bonus,Teresa Palmer plays Affleck’s wife.

This makes a modern noir stew of people doing the wrong things for the right reasons, double crosses, crooked cops of various degrees, and just plain evil men and women using whoever they can to get what they want. All these characters could be the main character in their own neo-noir film and all are interesting and entertaining in their own ways. I liked all the actors in this film. The standouts in this film?  Woody Harrelson, though he does nothing new here, he is David Douglas Brown from Rampart with a little bit more control of his anger or Marty Hart from True Detective with less family issues, but still has plenty of problems to make him an interesting hardboiled detective. Kate Winslet plays something totally different than what I have seen her do in the past as the female mob boss with no heart. Both were great, just for different reasons. 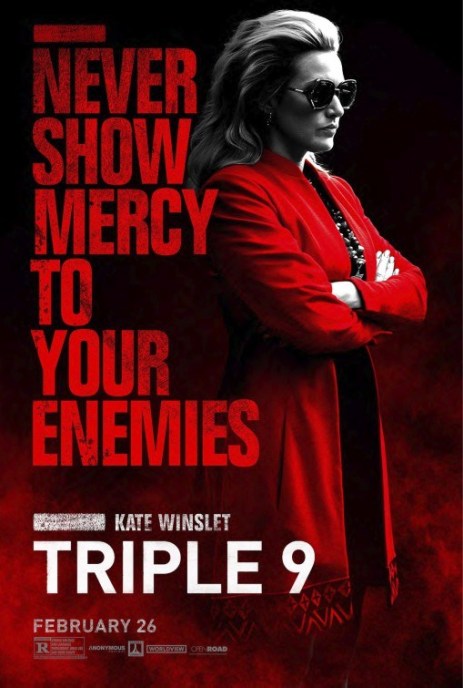 This film has some interesting cinematography with a very film noir feel. No, it isn’t in black and white, but you do get a feel of black and red, as you can see from the posters and I found that coloring throughout the film. John Hillcoat is one of those directors that consistently makes good films, but seems to stay under the radar. If you haven’t seen Lawless, do it! I look forward to seeing more from Hillcoat in the future.

So back to our original question, is this worth going to the theater to see? I enjoyed this film and found it an above average movie. This film doesn’t cover any real new ground, but twists up old themes into a story I found complex and well put together. The acting is top notch and though it isn’t an instant classic I would say noir fans will enjoy this film and it is worth going to a matinee to see it, even if that matinee is 100 miles away.

Favorite Tidbit: Look for Michael Kenneth Williams in a small role like you have never seen him before. If you are not looking for him, you may miss him.